2015’s Motorex was massive! It was like an Aussie Sema. It brought the best of the best from across our massive country, and in some cases even further abroad, to one single venue. Feature coming later in the week. 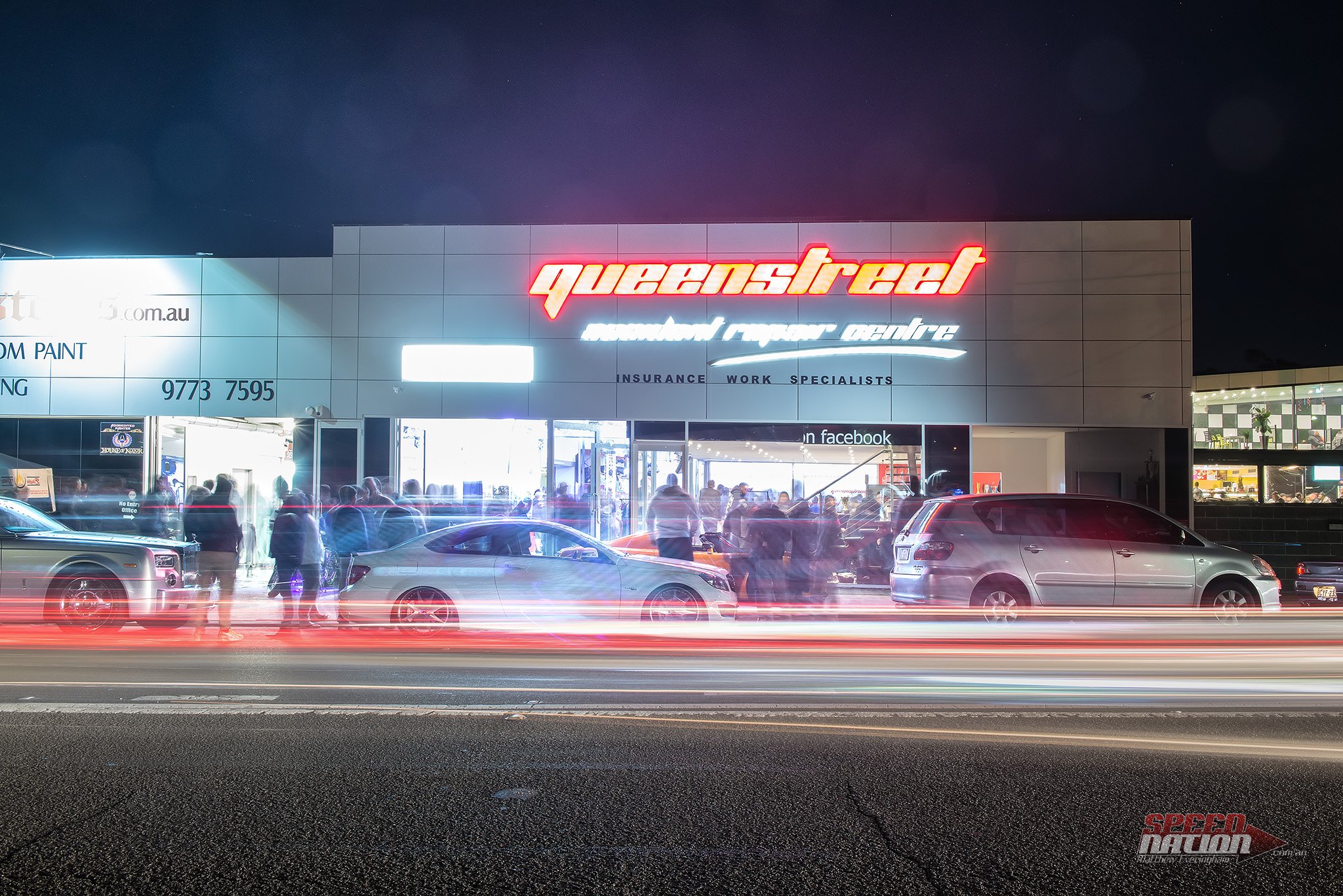 The boys at Queen Street Customs took advantage of having everyone united by throwing a LibertyWalk party with LB cars from almost every state and even having Kato-san, the creator of the LB Movement present!

I was impressed even before making it through the front doors. Bentley’s, RR’s, Lambo’s and even this Koengsiggiggiggeggegggg were parked out on the street and path. Awesome! 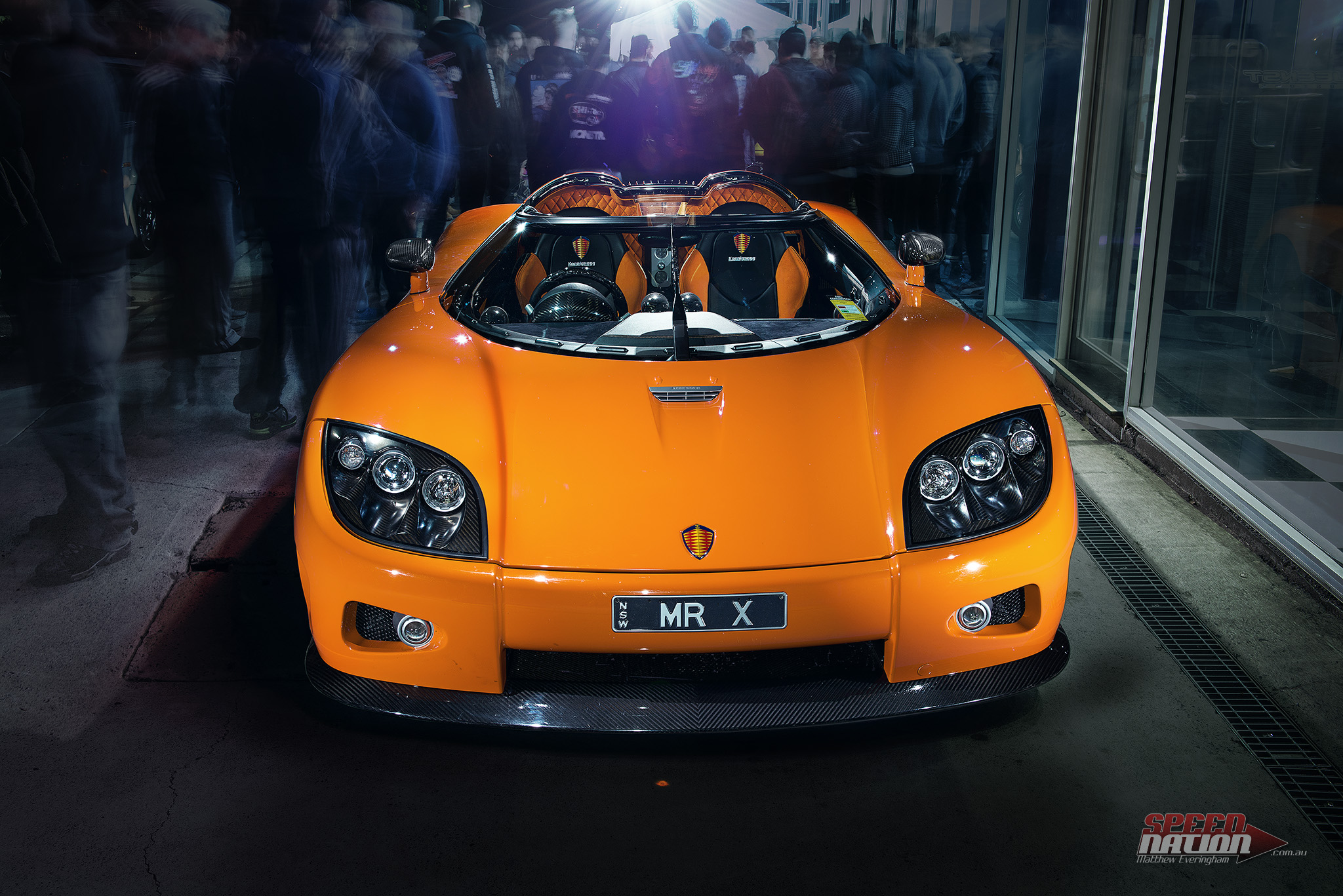 The main shop floor was transformed into the Turbosmart arena which was filled with amazing cars, a fun crowd and some killer tunes which were being mixed live in house. 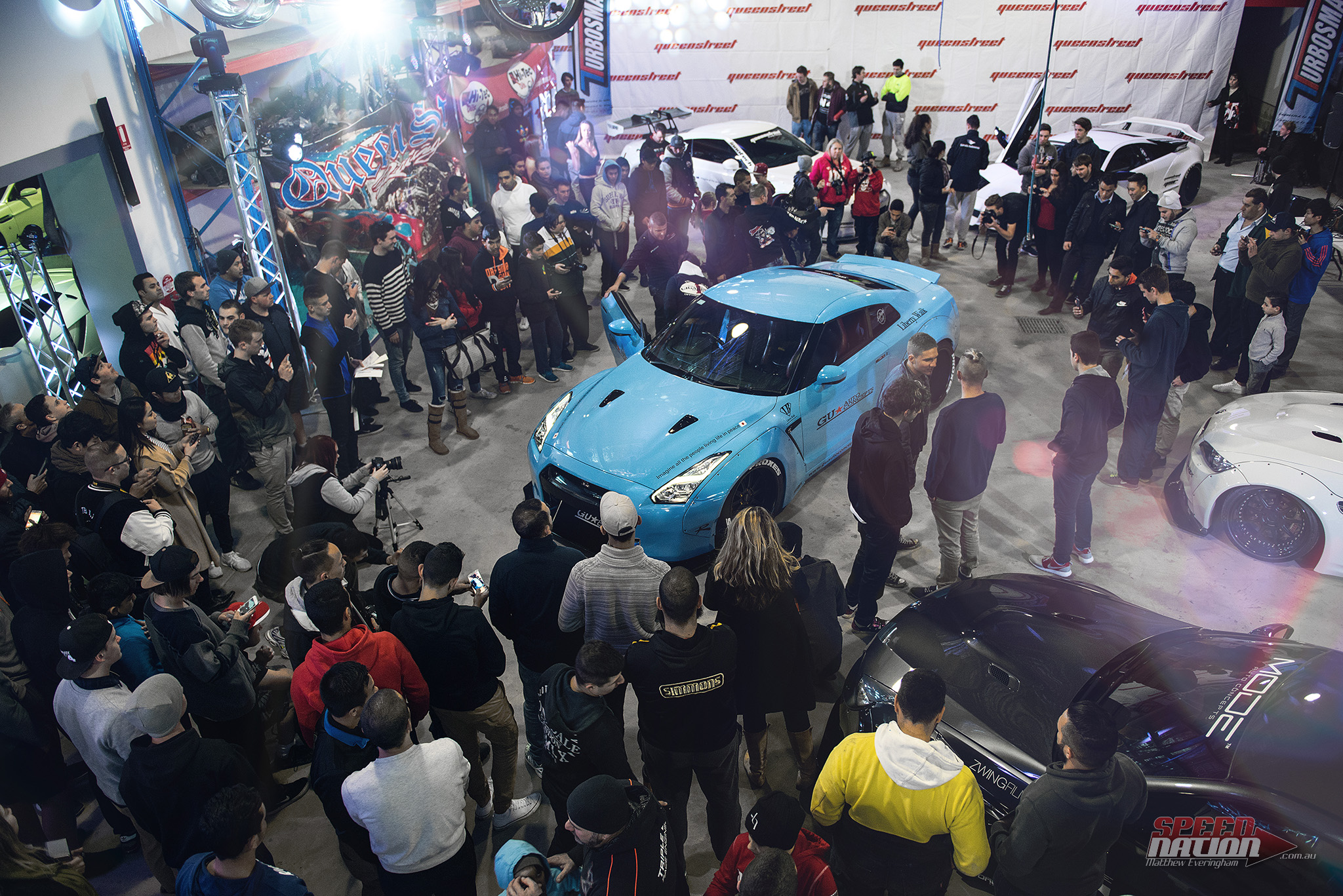 We heard the first whispers of the event over a month ago and made sure our schedules were clear. In Australia, seeing one LB car is rare. Apart from Motorex, I don’t think there’s every been so much LB in one Australian location before! We jumped at the opportunity to be principal photographers for the event!

The party was also a second unveilling of QSC’s R35 GT-R. Leading up to Motorex the car underwent a slight transformation. We all remember the matte lime green version. It polarised the community. People either subscibed and loved it, or flat out hated it.  No one felt indifferent about the build. Either way, QSC felt it was time for a facelift…. 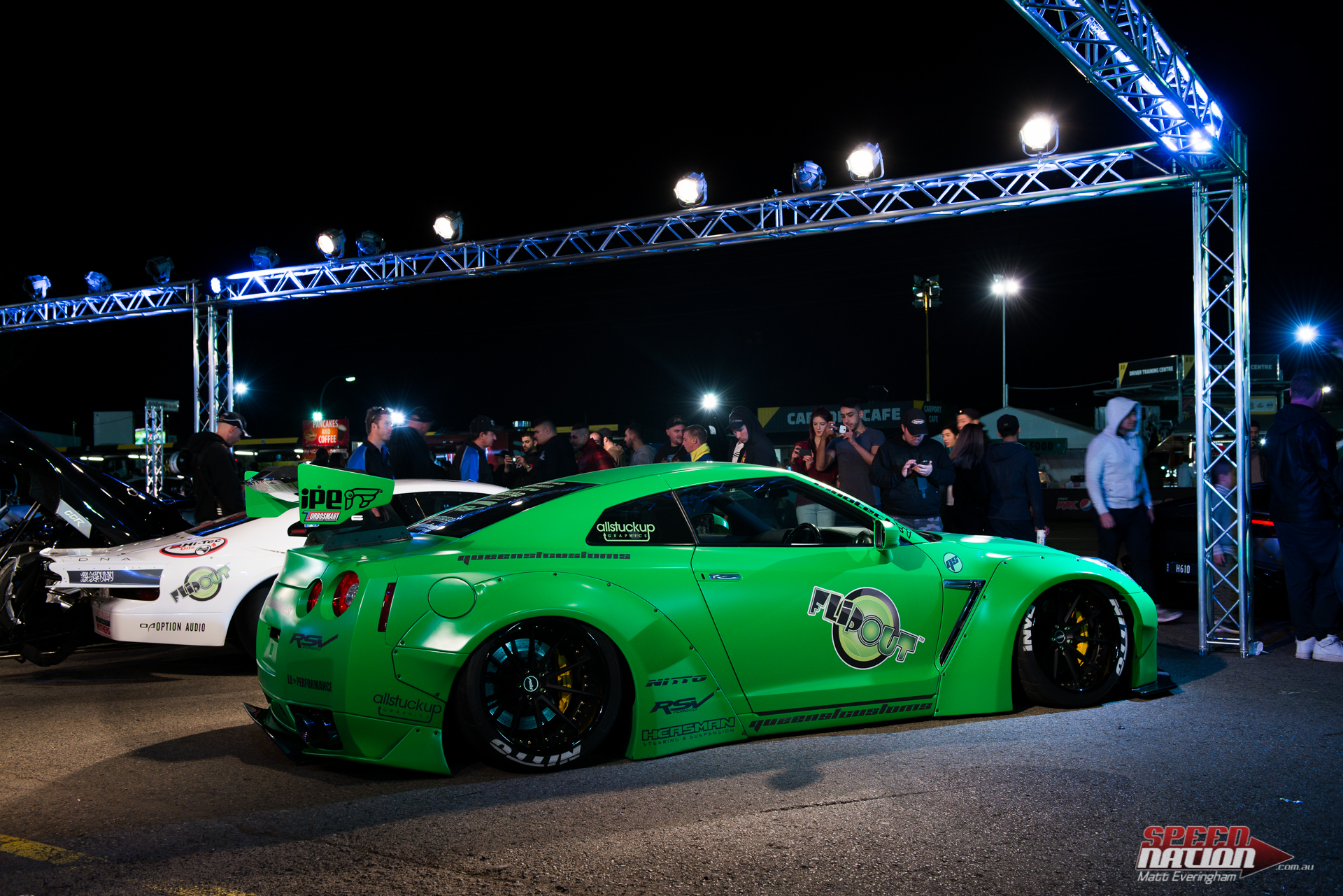 The GT-R was reborn! A high gloss pearl white with grey and black LB decals, finished with some annodised red accents for good measure.

A uniform look across the cars seemed to have been in mind with the new look matching the existing work on QSC’s Mercielago. It was a super clean look, and one that the crowd responded to favourable.
The GTR runs a set of custom made annodized candy red 20″ 3 piece rims. An Airride system means you can dump it when parking, or lift it to a suitable height when you need some clearance or need to keep things level when your pushing things. 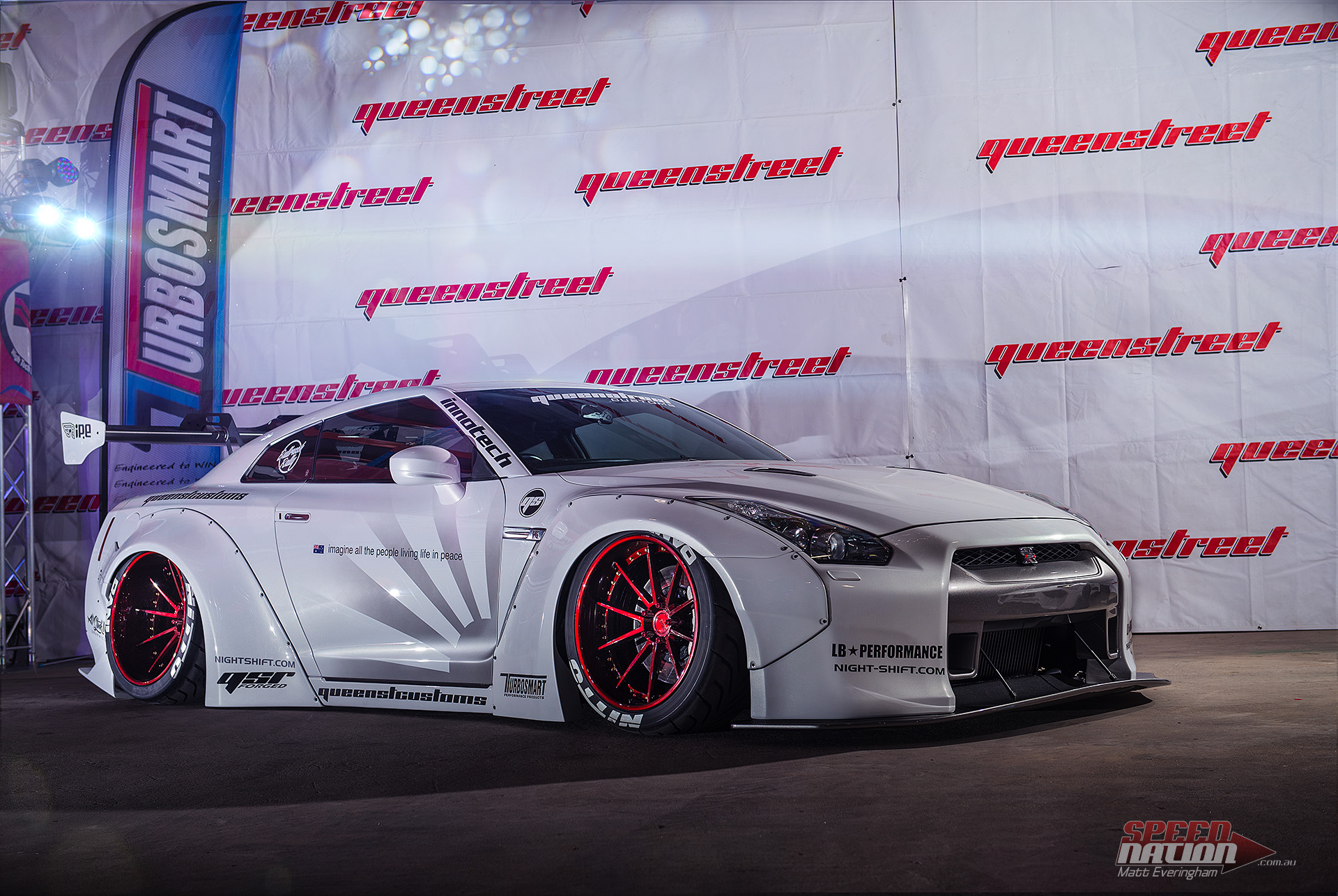 The car isn’t set up just for show. She puts out 450kw at all four wheels!
High flowed turbos, an upgraded intercooler and K&N filters make sure there’s always enough air in the mix. Larger injectors and a custom tune make sure there’s enough bang when required. A full IPE exhaust system takes care of the exhaust. She was tuned by BTA Motorsport, and she sounds pretty tough. 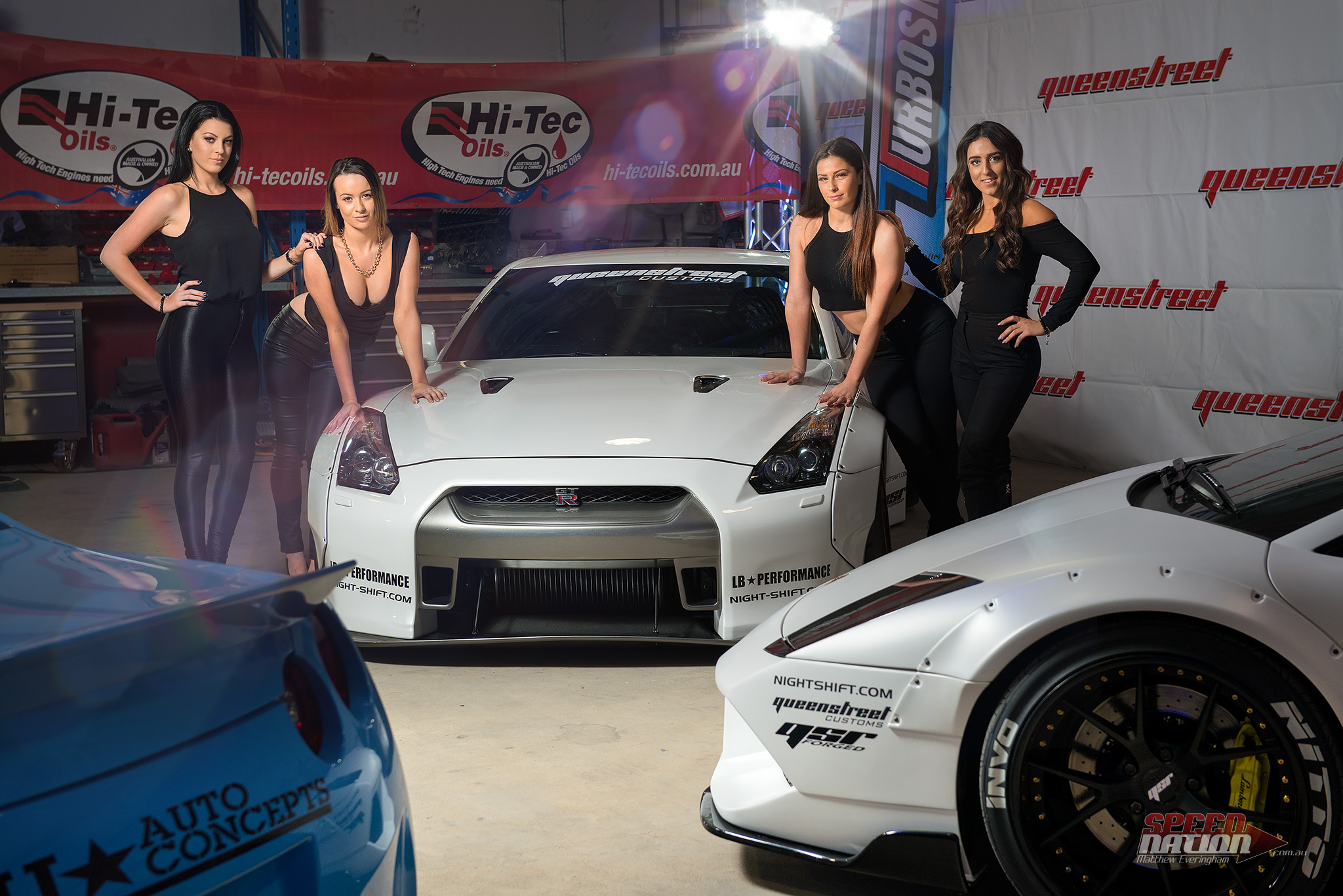 Queen Street’s Murcielago sports a full LB-Works kit. One of only 20 made! Super wide and super clean! So wide that they’ve managed to fit a set of forged rims measuring 13″ wide underneath! 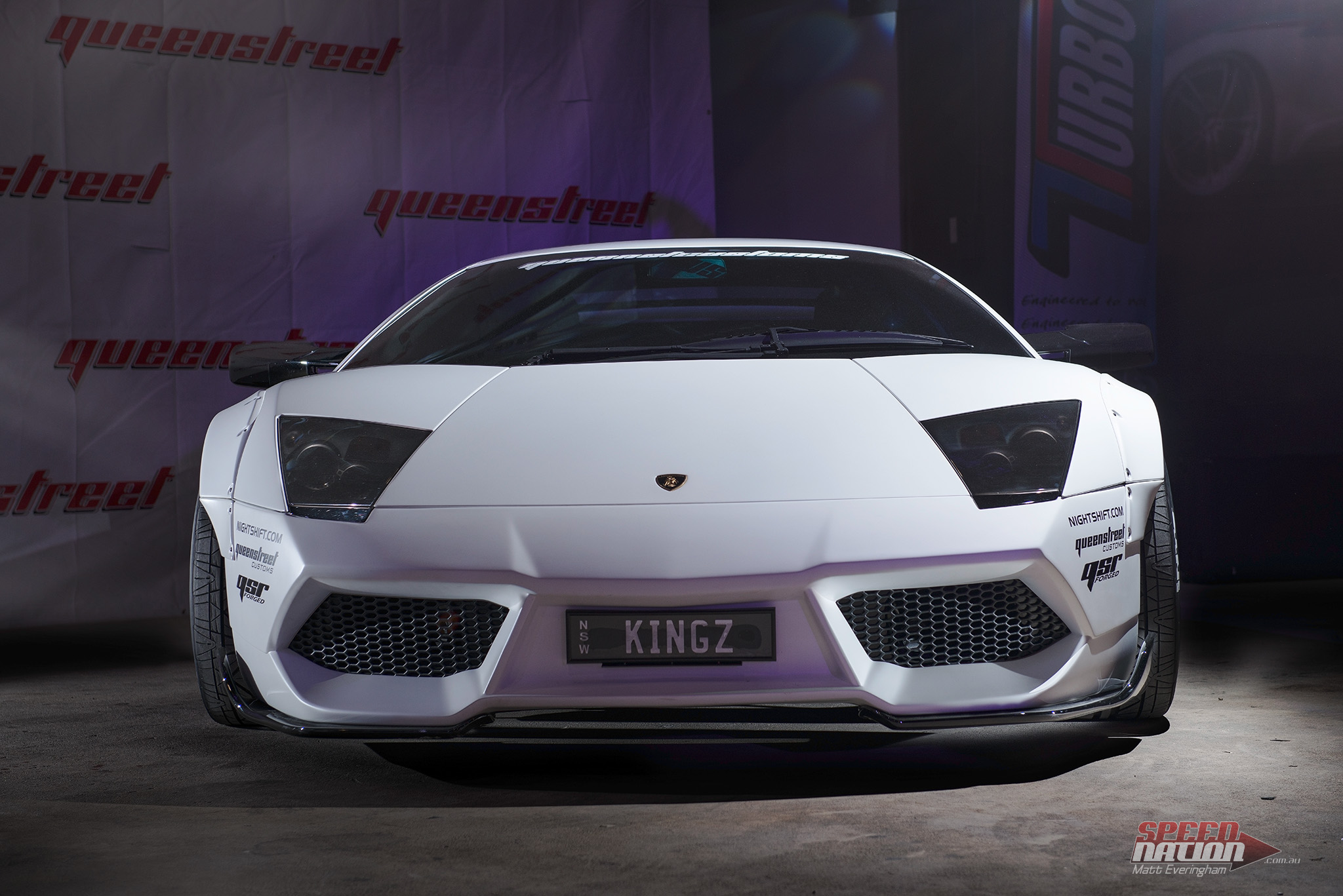 Again, an IPE exhaust system helps her growl when required. The LB Mercielago has some epic lines. It looks more like stealth fighter and less like a car. 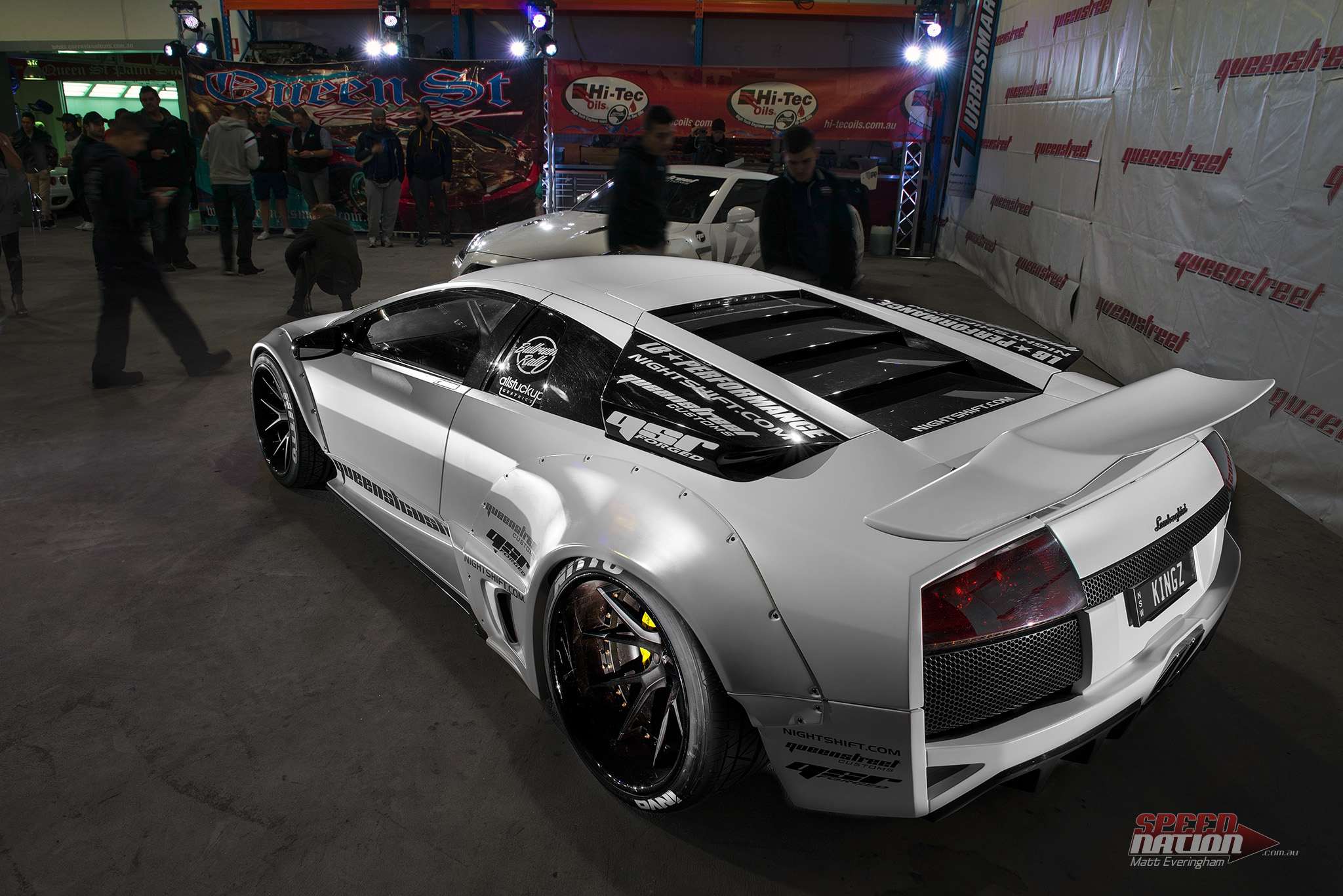 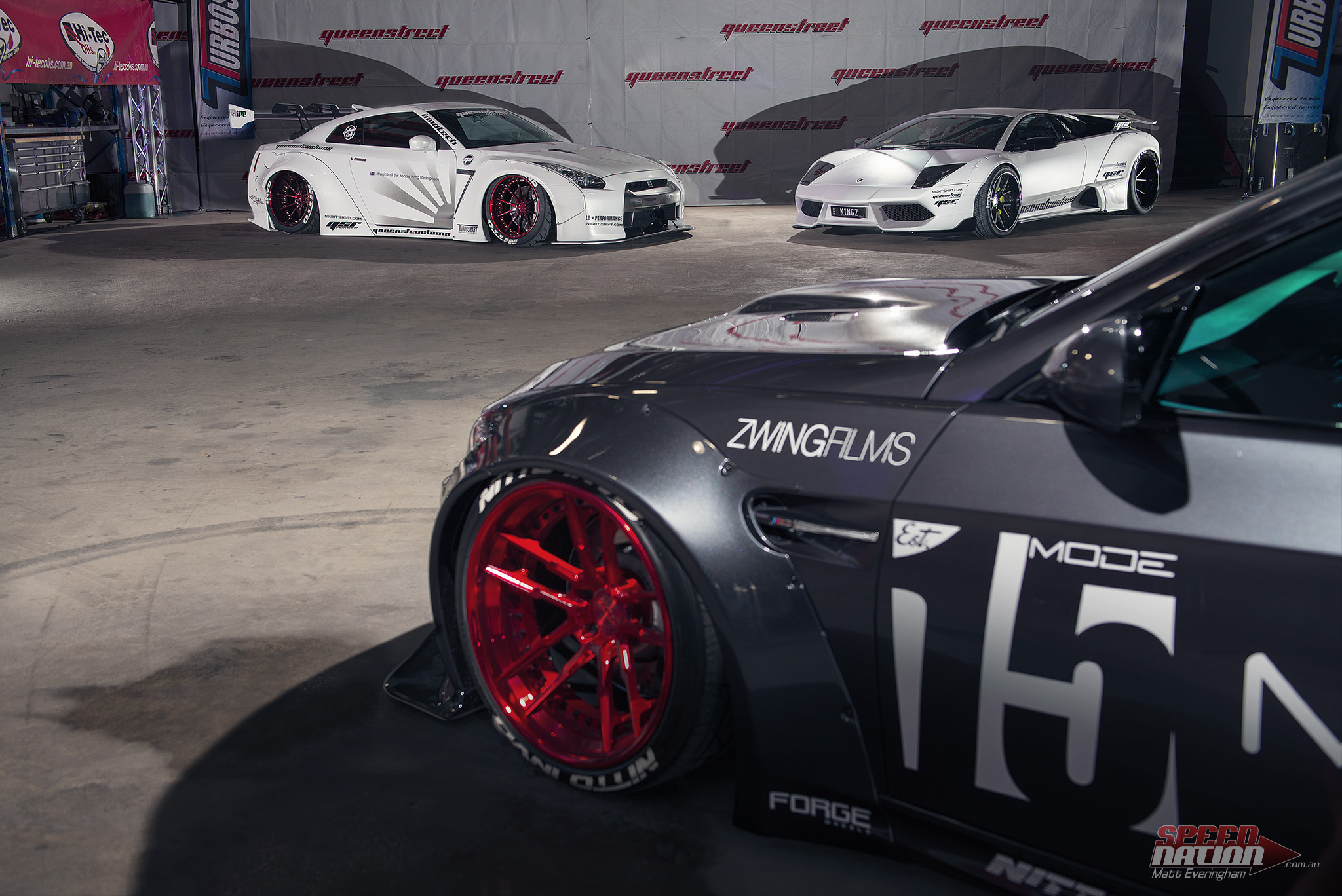 The colour combo on Ty’s M3 made my legs go weak. A super strong combo. She’s running custom FORGE 19″ rims with a floating lip. To mix things up, each side has a different colour. Red on one, Yellow on the other. Something different! It roars through an Armytrix full exhaust.

Both M3’s are running the LB WORKS bodykit. The light and darker paint seems to help emphasis different parts of the kit and body lines. Even though both cars are running the same kit, they looked plenty different even when sitting side by side. 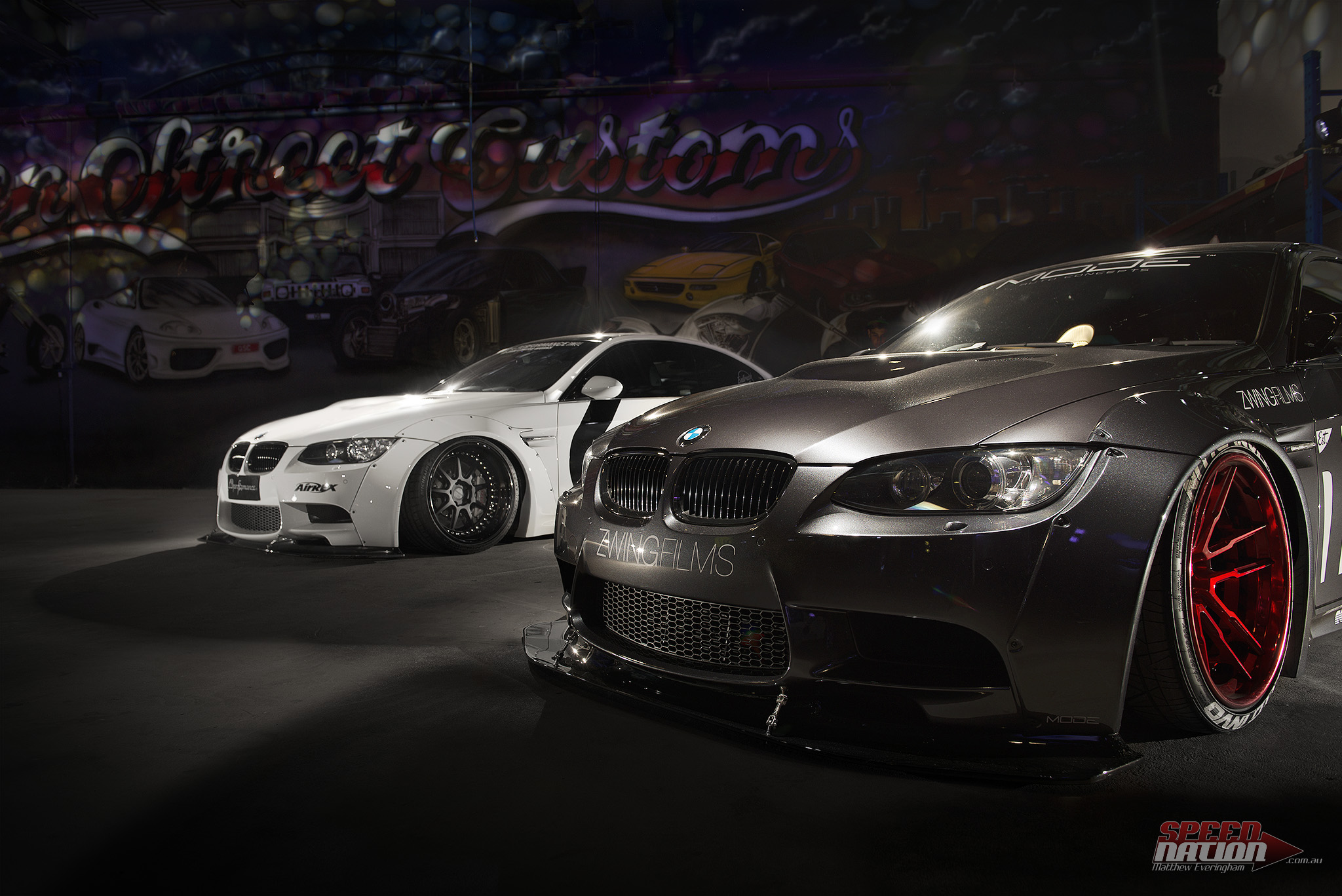 The other LB machine on display was the Duck Egg Blue R35 GT-R from Adelaide’s GU Autoconcepts.  They call their machine, XXXV. Pretty nice touch. 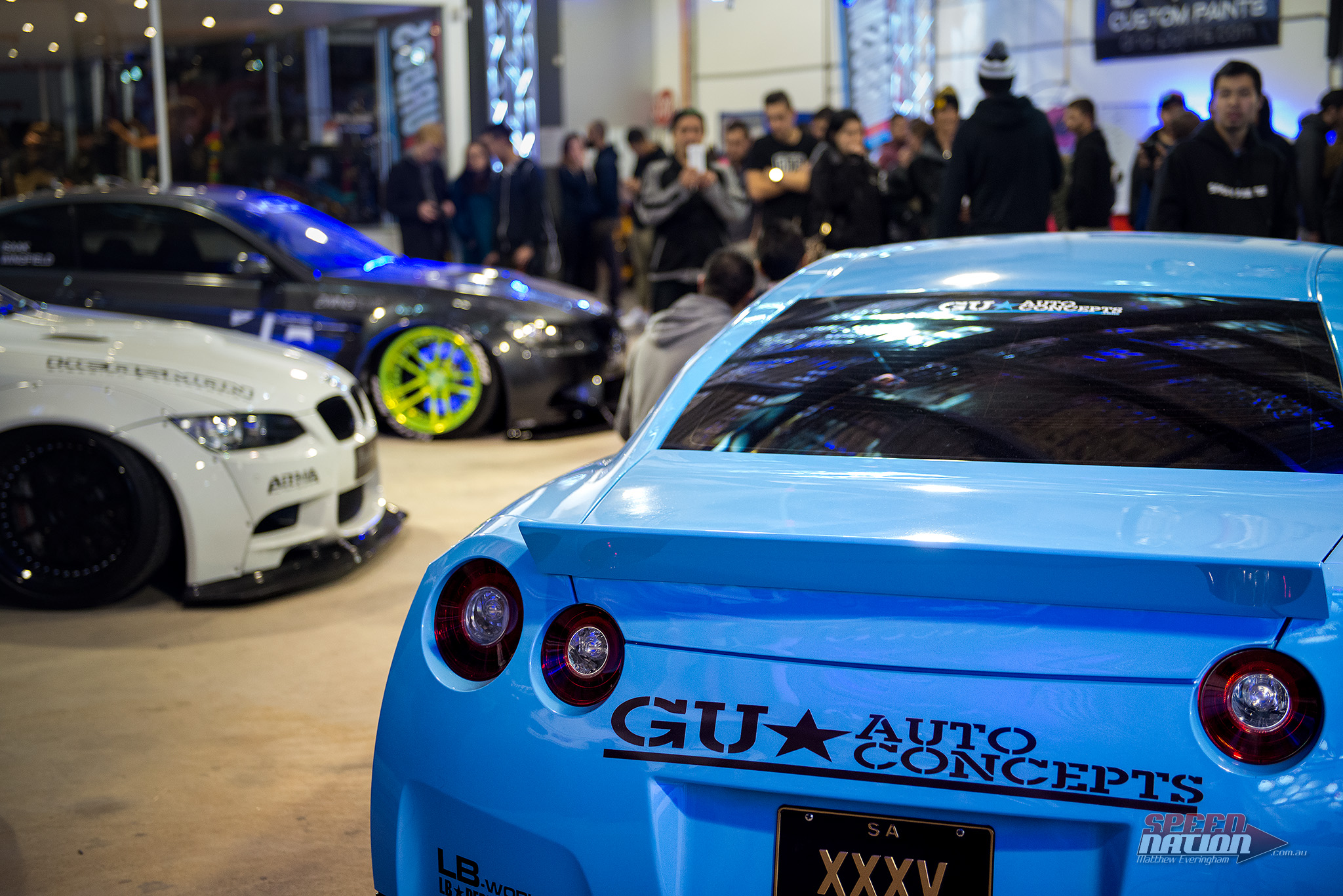 Sitting wide, but not quite as low as the Queen Street 35. 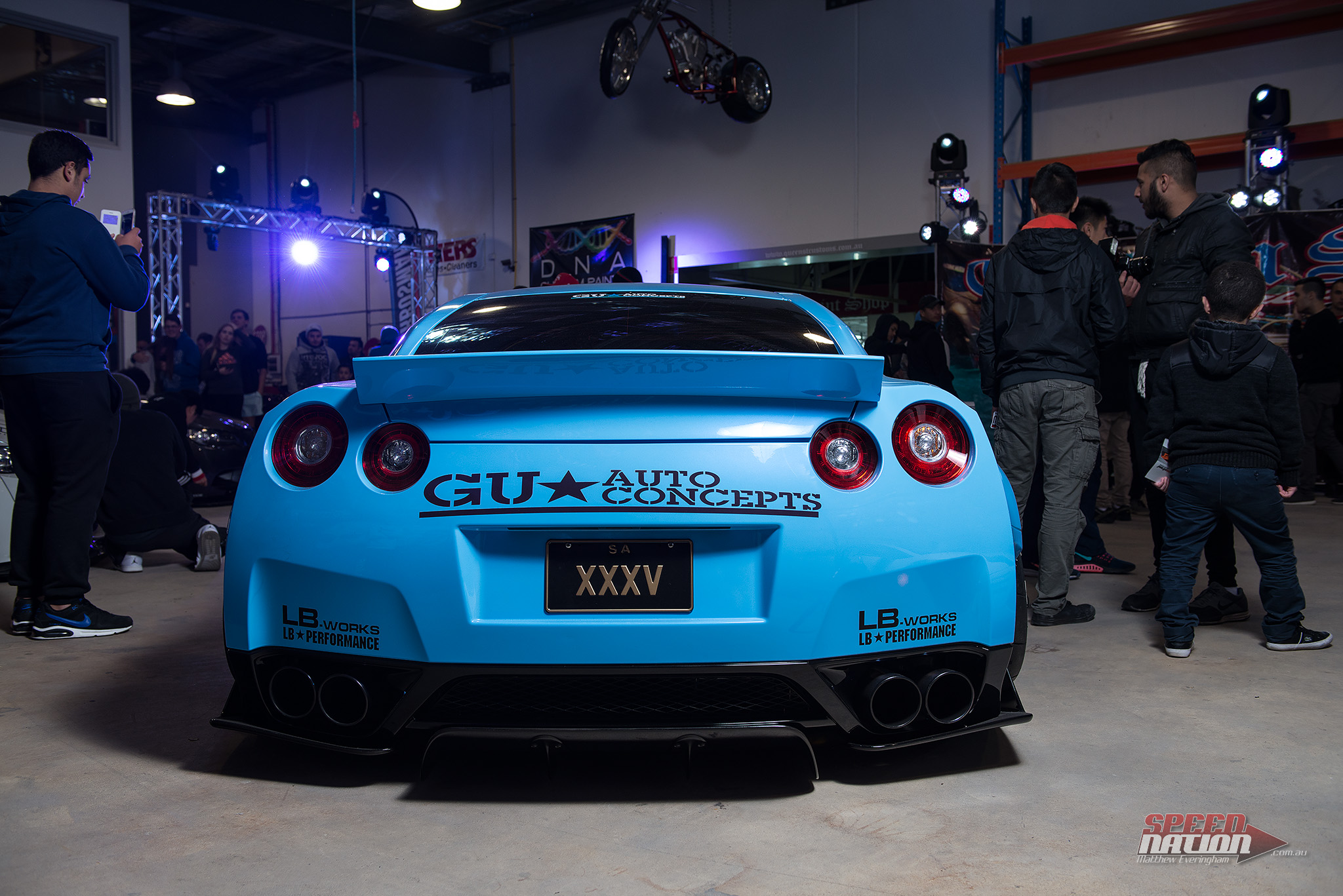 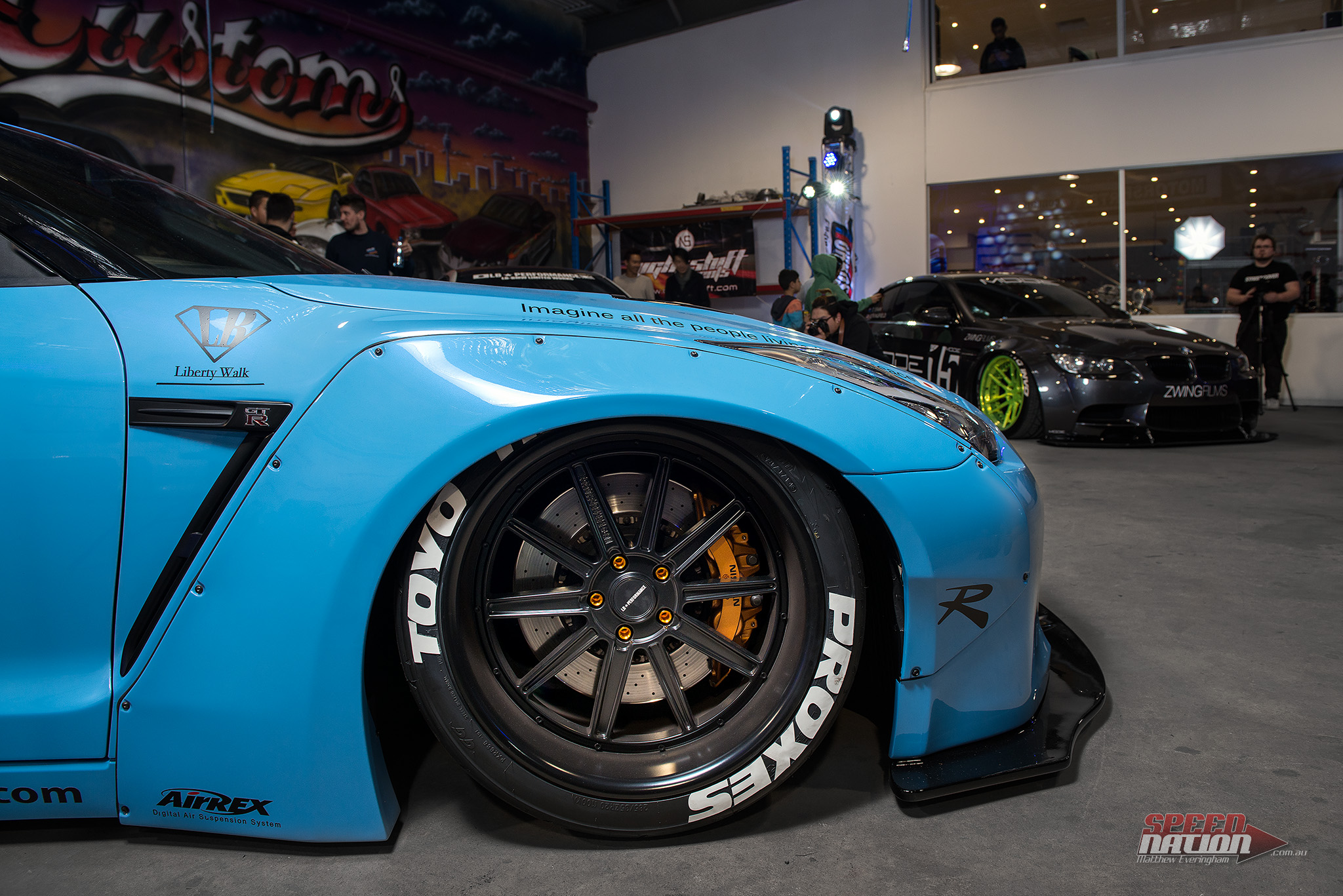 Some other sweet machines were tucked up out the back of the shop, my personal fav was OOSHIE! A pretty rad Evo build. 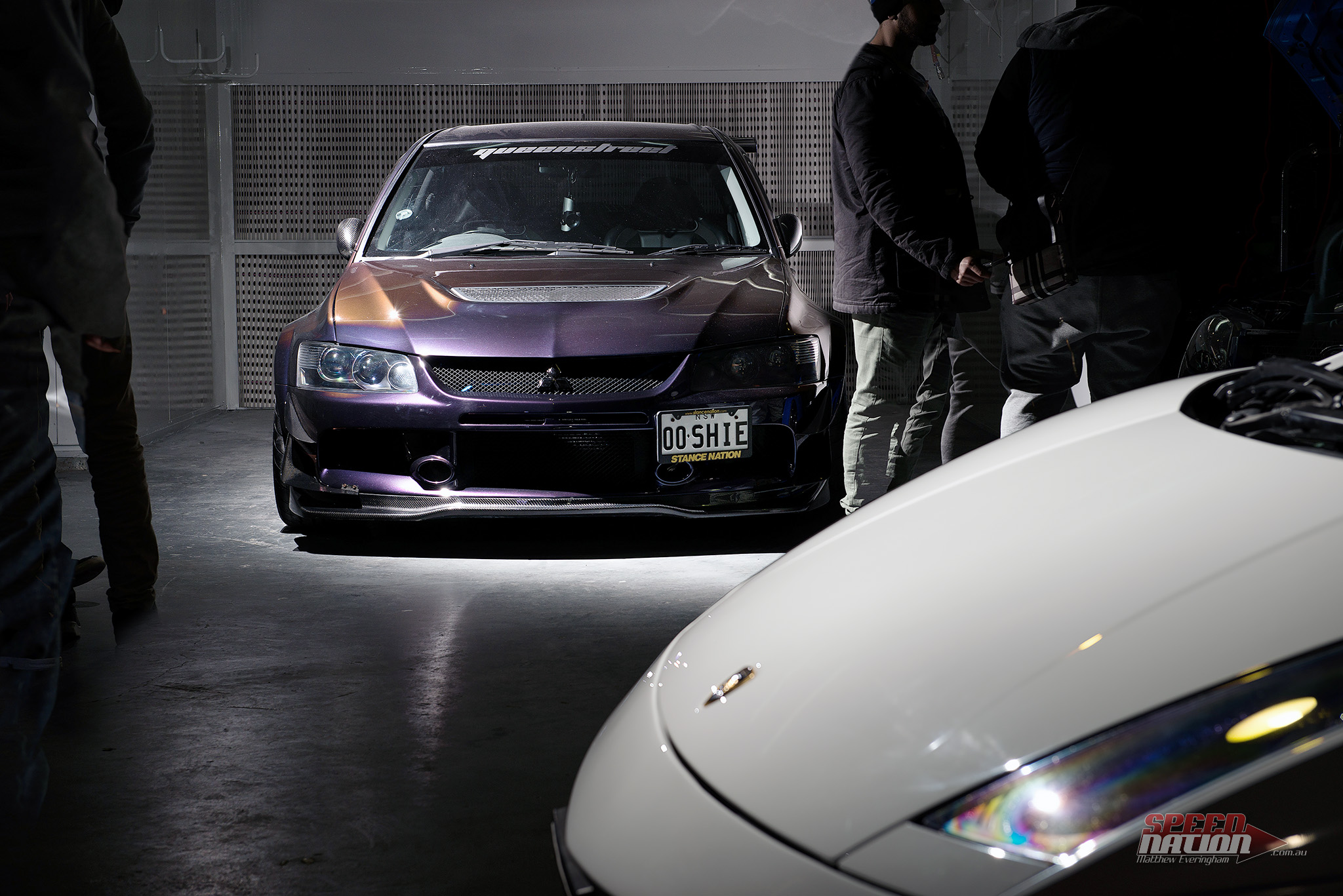 We’ll keep this short and sweet. Mad cars, good times! Oh, and here’s a bonus shot of Ty’s M3. The car was shot here during the event. 😉 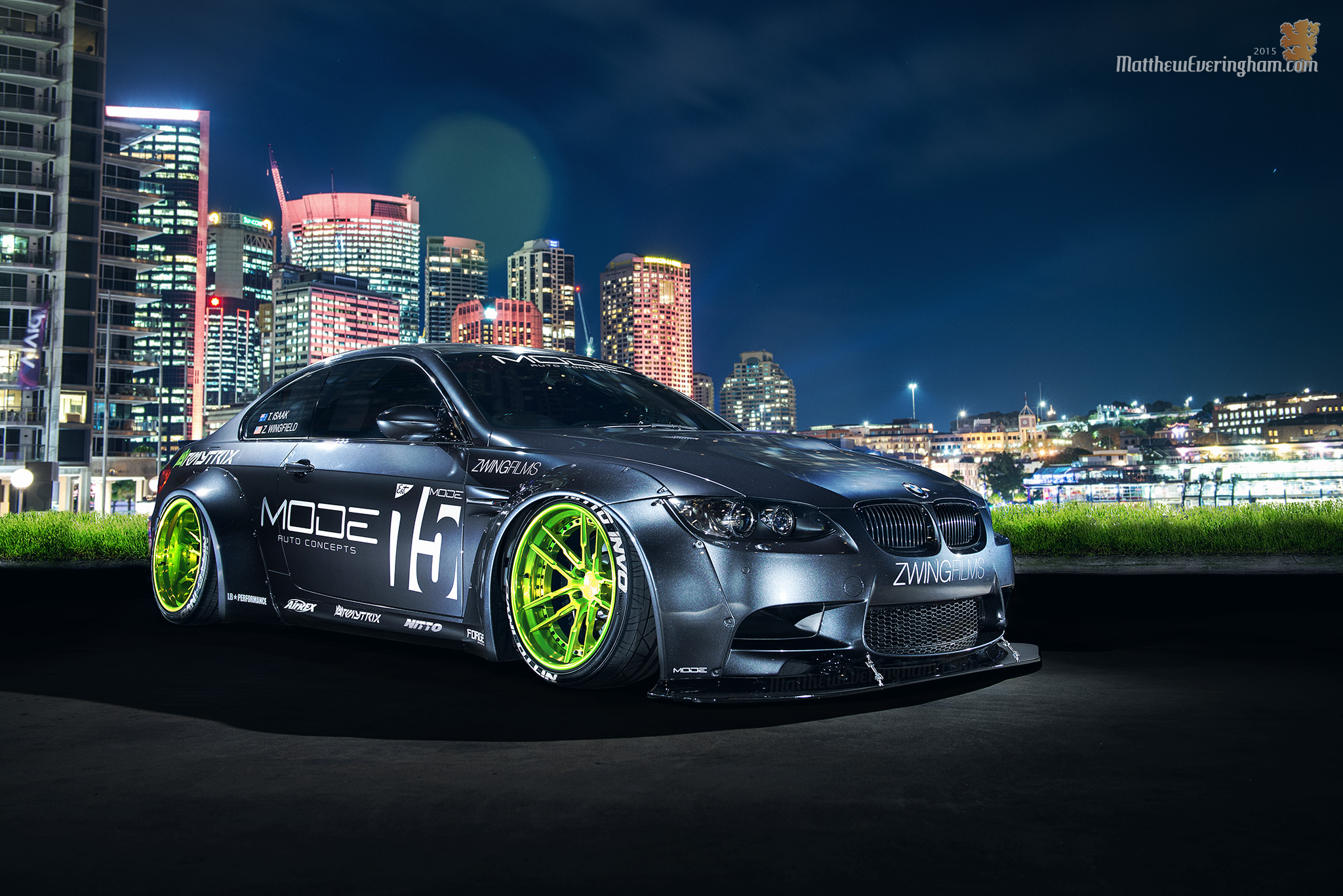